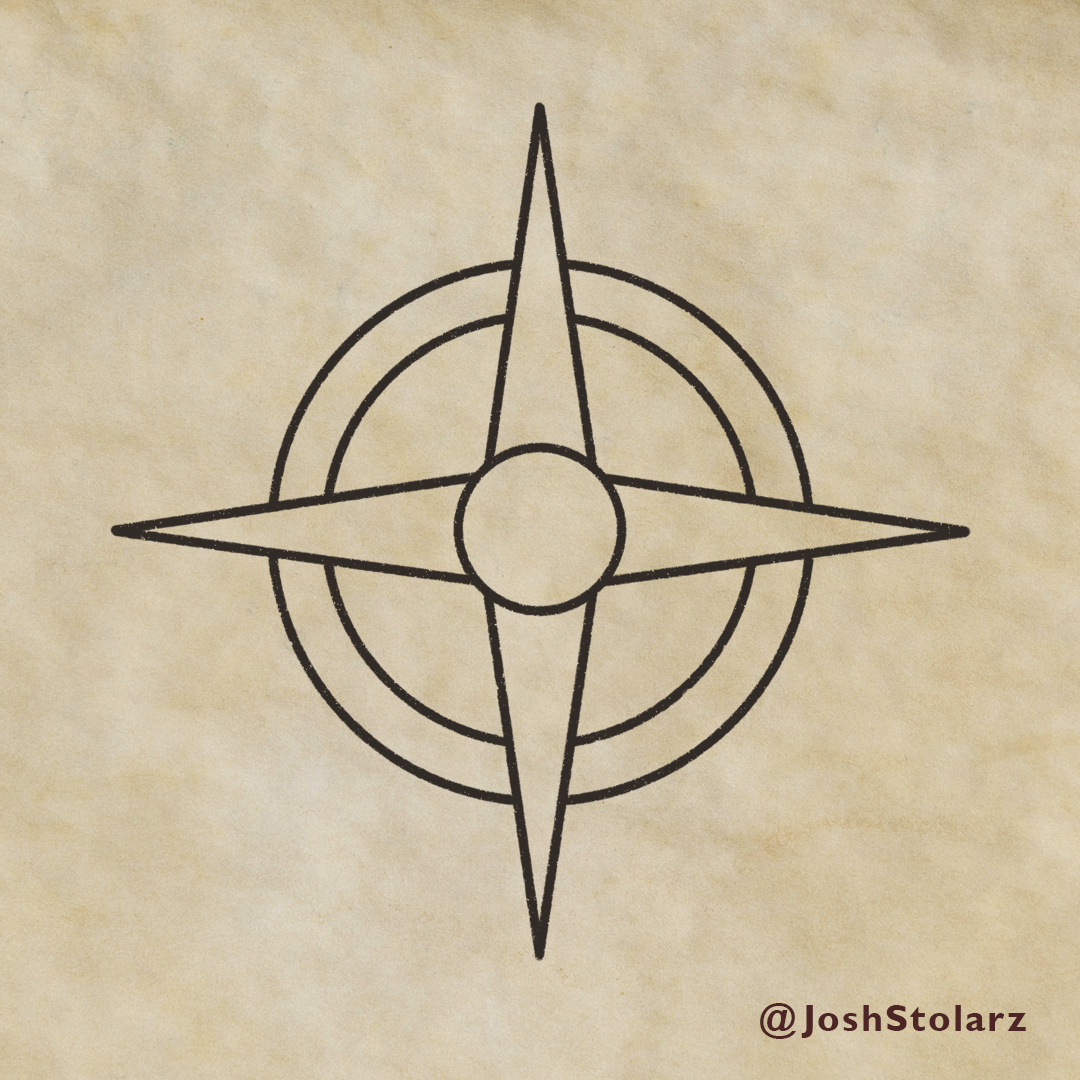 The first step is simple enough and all you have to do is draw a circle the size you want the main part of the compass to be.

Next you just need to add a smaller circle inside the one you already drew. This now becomes the outside rim of your compass

Add another circle much smaller in the middle of the compass. The size of which is really up to you and will depend on personal preference.

Then draw a triangle from the center circle out past the outermost circle. Be sure to erase any of the lines of the outer circles that the triangle overlaps. You can see that this is already starting to create dimension.

You now want to add three more triangles the same size as your first one. If you are working digitally this can easily be done by copying and rotating the original one you added.

Now you want to make four smaller triangles and place them between your four main directional points. Once again, if you are working digitally you can easily accomplish this by copying your original four points, rotating them, and scaling them down.

You now have the basic compass shape done and now you can move on to adding some details to really make it stand out.

The first thing you will want to do is draw some straight lines down the center of the original triangles you drew. Once you add some shading this will really make them stand out.

Next you can add another circle inside the innermost circle. Then add some small tick marks on the inside of the second circle in between each triangle you’ve drawn.

7: Blocking in Some Colors

Block in some base colors. I chose a red (#8c4646) for the outer ring and a beige (#c5b195) for the rest. Be sure to mix it up and try some different color pallets though. Often this will be based on the existing colors you used on your map. You want something that will compliment well with the overall look of your project.

Imagine where the light would hit the compass, and draw shadows accordingly. In this case my light source is coming from a high left. Which means that it will throw sections on the right and bottom in shadow. The other thing that you can safely do is add a little bit over shadow anywhere something overlaps.

I am using a custom stipple brush I created for the shading, because I wanted a lot of texture so it would look more vintage. But the main thing to keep in mind is to choose the tool that will achieve the look you want for the final piece.

9: Adding a Pop of Highlights

Now the compass is really getting some depth, but it looks a little flat still. To fix this you can add some highlights on the opposite side of where you placed your shadows. This will really make the whole thing stand out.

One thing to keep in mind is that the stronger the highlights are, the more reflective and “metal” a surface will appear. A smooth metal is more reflective than your average stone. Keep that in mind particularly as you shade to achieve the look you want.

As you can see, there are a number of things you could potentially do to add variation to this design. Even as I put this tutorial together I came up with half a dozen different looking compasses just by adjusting the size of the circles, the length of the points, and the amount of detail I included. The nice thing about the compass being such a basic shape is that you can easily incorporate patterns or illustrations that really match the map you are placing it on, while keeping it easily identifiable as a compass.

Read More:  10 which of the following controls the rate of groundwater flow? Ideas

If you found this helpful I would appreciate it if you pinned this to save for later and to share with your friends.
Thank you, and I look forward to seeing you map your story!

PIN THIS FOR LATER

How to Draw a Simple Compass On Your Maps – Map Effects If you have questions that need to be answered about the topic how to draw a compass on a map, then this section may help you solve it.

How do you depict a straightforward compass on a map?

Around the outside of the dial, draw four equidistant small triangles, one at the top, bottom, left, and right sides. Sketch short, straight lines along the dial edge between these triangles. Draw a small triangle on either side of the compass needle.

How should a compass be drawn?

How are cardinal directions drawn?

How to Sketch a Compass Rose

Iframe with the src of “https://www.youtube.com/embed/0KdvOkeTXe4”

As you rotate yourself while keeping an eye on the magnetic needle and holding the compass flat in front of you, make sure the direction of travel arrow is pointing directly ahead. When the red end of the needle precisely aligns with the orienting arrow, stop.

Read More:  10 what does the inhibitor bind to during feedback inhibition? Ideas

Whether a player wins or loses, they are guaranteed the same number of matches as all other players in a Compass Draw, which is the same as a traditional knockout with the exception that when a player is knocked out, they enter another draw.

How do you create a true compass in drawing?

Start by pointing your left arm in the direction of the sun in the morning, then take your right hand and point it west, so that you are now facing south and have your back to the north. This will help you to understand where north, south, east, and west are. Image: Caitlin Dempsey

How can one determine north, south, east, and west?

How can you tell which way is up on the map?

Iframe with the src of “https://www.youtube.com/embed/2koOnPGvm9Y”

Since opposites attract, a compass essentially consists of a light magnet—typically a magnetized needle—on a free rotating pivot that allows it to react to magnetic fields more effectively. The southern pole of the needle is drawn to the Earth’s magnetic north pole because opposites attract.

For beginners, how does a compass operate?

What are a compass’s three main components?

The four intercardinal (or ordinal) directions are created by bisecting the above, giving: northeast (NE), southeast (SE), southwest (SW), and northwest (NW). The four cardinal directions are north (N), east (E), south (S), and west (W), at 90° angles on the compass rose.

How exactly do you use a compass?