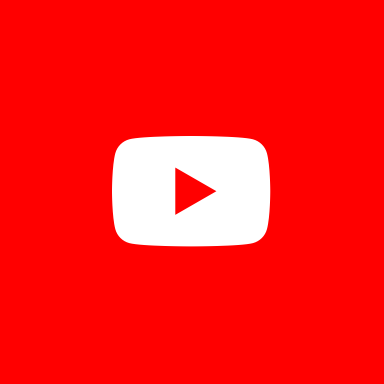 “You done messed up, A-A-Ron!” yells Mr. Garvey, a substitute teacher, at Aaron, an innocent-looking student, pointing at him with both an index finger and a pinky. This is a now iconic line from “Substitute Teacher,” Key & Peele’s most viewed comedy sketch on YouTube, with 188 million views and counting.

The success of the sketch is, in part, attributed to its simple premise: Mr. Garvey, a black substitute teacher from an inner-city school, is maladapted to a classroom full of white middle-class students. The sketch offers a parody of the familiar film convention of white teachers as inner-city savior figures, in which they overcome resistance from unmotivated students of color to eventually lead them, through tough love, to a bright future.

Mr. Garvey does not follow that well-worn path: he is paranoid that his well-behaved students are “messing” with him and, in response, takes an excessively aggressive and authoritarian tack, creating hilarious classroom interactions. Like other Key & Peele sketches that elicit laughter while delivering social commentary, the “Substitute Teacher” series brilliantly explores cultural relativism and educational inequality.

“Substitute Teacher” plays with our cultural conceptions of stereotypically black and white names. When read aloud by Mr. Garvey during roll call, Jacqueline becomes “Jay-Quellin,” Blake becomes “Bala-Kay,” and Denice becomes “Dee-Nice.” And of course, Aaron becomes A-A-Ron. When the students don’t recognize Mr. Garvey’s pronunciations and offer the common pronunciations of their names, Mr. Garvey, played by Keegan-Michael Key, is convinced that students are intentionally mispronouncing their names to disrupt the class and undermine his authority, and becomes increasingly exasperated.

The sketch’s final twist comes after Mr. Garvey expels “A-A-Ron” from the classroom and then goes on to call for “Tym-oh-thee.” To everyone’s surprise, the class’s only black student, played by Jordan Peele, emerges suddenly from behind a white student and calmly responds, “Present.” “Thank you!” Mr. Garvey replies, relieved. “Finally, someone makes sense!”

“Substitute Teacher” flips cultural stereotypes about white and black names by centering around a black man who considers traditionally white names to be “silly-ass names.” The sketch draws out the relativity and subjectivity of cultural norms — how the designation of something as “normal” or “abnormal” depends entirely on culturally inflected perspectives and, often, on cultural power. It expertly dramatizes this concept by focusing on name pronunciations in English.

Read More:  Top 10 bella thorne her and him movie trailer They Hide From You

Given that English is not a consistently phonetic language and has many arbitrary pronunciation rules, especially around names (e.g. “Chloe,” “Isaac,” “Michael,” “Phoebe”), the classroom roll call provides a perfect set-up to illustrate cultural relativity: why can’t Aaron be pronounced as A-A-Ron, as Mr. Garvey insists? 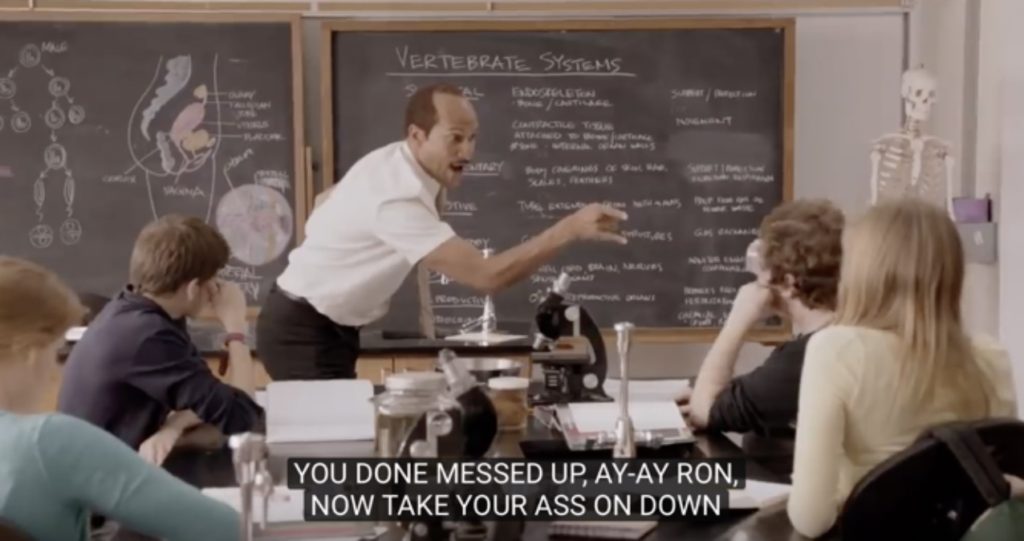 If the situation were reversed and a white teacher expressed skepticism about the pronunciation of a black student’s name, it wouldn’t be comic. Rather, it would reflect a prevalent and subtle form of racism that persists in our culture. White people often have a hard time pronouncing the names of people of color, and students of color know the drill, from those long pauses during roll call to the offhand “Sorry if I mispronounced your name” after a botched, halfhearted attempt. However, names that some might consider “weird” or “foreign” are perfectly normal and even common in other cultures. By subverting our expectations of common white name pronunciations, “Substitute Teacher” flips these cultural dynamics and highlights the existence of cultural perspectives often hidden from mainstream America.

Mr. Garvey embodies the stereotype of a substitute teacher from an inner-city school: a middle-aged man with a receding hairline and a neat mustache who dresses like a low-level salesperson. In an interview with The Week, Key and Peele said they wanted to “give Mr. Garvey a spice of ‘haggardness’” to reflect his exhausting work experience at inner-city schools. He is eager to establish his authority the minute he steps into the classroom. Perhaps this has become his instinct after 20 years of dealing with a rough educational environment in which students often “mess with” their substitute teachers; or, perhaps as a black teacher who usually teaches in segregated school districts, he is nervous facing a group of white students and feels pressured to put on a tough appearance to earn their respect.

In contrast, the students are well-behaved in a relaxed and comfortable classroom environment to which they’re accustomed, not overreacting to Mr. Garvey despite his increasing level of aggression. We recognize the students instantly as identifiable types: the ambitious, entitled Jacqueline, the nerdy, soft-spoken Blake, the independent-minded Denise, and the expressive, playful Aaron. These student characters help create a realistic backdrop, upon which Mr. Garvey’s reactions appear even more dramatic and outlandish.

Mr. Garvey’s exaggerated facial expressions and dramatic body language contrast with the students’ subdued presence. The battle for classroom control, then, is also a clash of performance styles, or styles of self-performance. Increasingly exasperated by the students’ corrections during role call, Mr. Garvey breaks his clipboard over his knee, clears a cluttered table with a single impassioned sweep, and gives Aaron the “sign of the horns” — a hand signal used in heavy metal music and sports, and not by a teacher to a student.

Mr. Garvey also has a unique style of speech, blending street slang with more elevated language. “Do you want to go to war, Bala-Kay?,” he asks Blake. “Cuz I’m for real. I’m for real.” He then calls on “Dee-nice” and threatens that “the whole class is gonna feel [his] wrath” if someone says “some silly-ass name.” As the conflict intensifies, Mr. Garvey drops some ten-dollar words into his admonishments. After expelling Aaron from class for correcting his mispronunciation of Principal O’Shaughnessy (“Oh-Shag-Hennessy”), Mr. Garvey accosts the class for being “insubordinate and churlish.”

In the sequel to “Substitute Teacher,” after ordering Aaron to “O-Shag-Hennessey’s office” yet again, Mr. Garvey scolds the class as “mischievous and deceitful, chicanerous and deplorable,” turning the word “chicanery” into an adjective in an attempt at parallelism. By mixing sophisticated words with slang phrases like “for real” and “silly-ass,” Mr. Garvey tries to establish himself as an educated and authoritative figure while still demonstrating street credibility.

Ultimately, “Substitute Teacher” and its sequel “Substitute Teacher Part II,” along with other Key & Peele sketches like “If Hogwarts Were an Inner-City School,” invite us to reflect on the educational disparities between inner-city schools and suburban schools.

In the sequel, Mr. Garvey is dubious that the school has “clubs” for which students are allowed to leave class early. After ridiculing Jay-Quellin, Bala-Kay, and Dee-Nice for being in their “imaginary clubs,” he explodes when A-A-Ron proudly identifies himself as the president of the glee club because, in Mr. Garvey’s mind, there is no way they have “a club dedicated to a TV show.” Though Mr. Garvey has “taught school for over 20 years in the inner city,” he has apparently never heard of extracurricular clubs or enrichment activities — resources and opportunities that inner-city schools cannot provide their students. His vexation builds and builds, finding release in the final moments of the sketch only when “Tym-oh-thee” provides an acceptable answer to Mr. Garvey’s request for a “valid reason” for leaving class: “I gotta pick up my daughter.” “You’re excused,” he says calmly.

To our shock, the sketch ends with this complicated twist. On the one hand, it highlights the gap between how our culture imagines the life trajectory of white students at suburban schools (with their extracurriculars taking them on a glide path to college and their future careers) and how it imagines the trajectory of black students (with the challenge of teen parenthood opening onto a troubled path forward).

On the other hand, it plays with the implication that, even when black students like Tym-oh-thee attend better-resourced schools, they may find themselves facing the same challenges as black students in inner-city schools. The strictures of race define American life so intensely that they can’t be altered simply by a school district change, and perhaps lowered expectations for black students across schools contribute to this outcome. 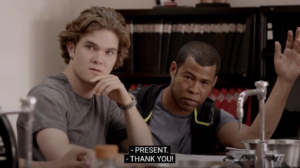 At the schools where Mr. Garvey typically works, educators understand themselves as working in survival mode: the priority is to keep the school afloat and maintain a level of order in the classroom. His classroom management tactics — which are based on punishment, verbal abuse, and physical threats — have been built, we assume, over years of handling chaotic classrooms with students whom he views as “insubordinate and churlish.” In turn, it’s not hard to imagine the impacts of this authoritarian, low-trust education environment on inner-city students who have Mr. Garvey as their regular teacher.

Meanwhile at the suburban school where Mr. Garvey substitutes, students have luxuries like lab equipment, classroom supplies, and after-school programs, and are likely taught with methods based on encouragement and incentives rather than punishments and threats. However, Mr. Garvey’s teaching style is so ingrained that he fails to recognize the difference in classroom dynamics and adjust his expectations, creating conflict, drama, and, incidentally, comedy.

Hecong Qin is a student in the Department of Bioengineering at the University of California, Berkeley. 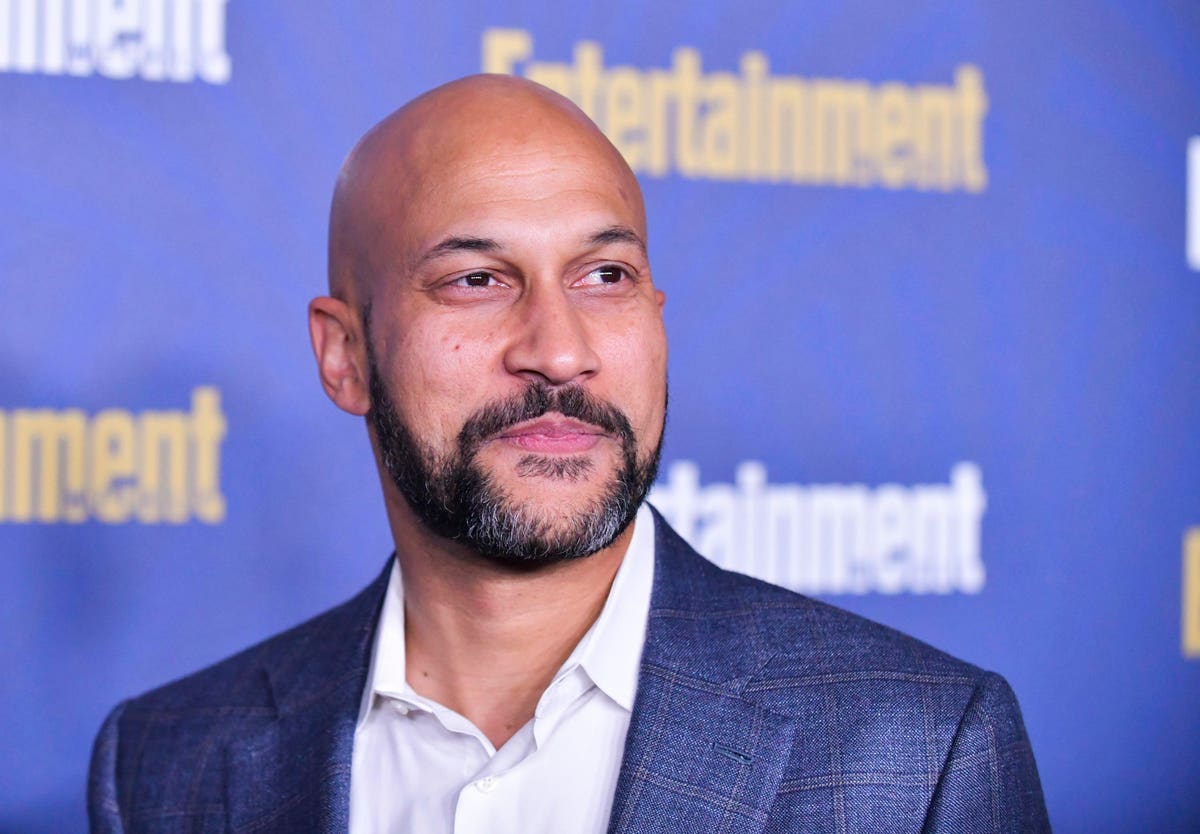 If you have questions that need to be answered about the topic comedy central substitute teacher part 2, then this section may help you solve it.

Which episode is substitute teacher?

Substitute Teacher is the 17th episode from season 3 of The Grim Adventures of Billy & Mandy.

What season is Key and Peele Substitute Teacher Part 1?

Who is Jacqueline in Key and Peele substitute teacher?

Who is Denise in substitute teacher?

What season is substitute teacher?

Substitute Teacher is the sixth episode of the first season of Henry Danger.

Where can I watch substitute teacher?

Where can I watch Substitute Teacher 2?

Where can I watch Substitute Teacher 2 School’s out?

Currently you are able to watch “The Substitute 2: School’s Out” streaming on Hoopla or for free with ads on The Roku Channel, VUDU Free, Tubi TV, Freevee Amazon Channel.

?You done messed up, A-A-Ron!? yells Mr. Garvey, a substitute teacher, at Aaron, an innocent-looking student, pointing at him with both an index finger and a pinky. This is a now iconic line from ?Substitute Teacher,? Key & Peele’s most viewed comedy sketch on YouTube, with 188 million views and counting.

How much do substitute teachers make?

Substitute teaching is a very challenging job?even full-time teachers will admit that. It’s near impossible to walk into a room full of strangers and expect they’ll respect you, listen to you, and behave nicely!

Do sub teachers get paid for holidays?

In the teacher’s fortnightly pay cheque, they will see the daily rate paid. The substitute teacher will then receive their 11% holiday pay for each day worked in a lump sum payment at the end of each term.